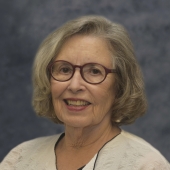 Member, Board of Trustees
A longtime administrator and English Instructor at Southwestern Community College, Jean Ellen Forrister was sworn in as a member of the Board of Trustees on July 28, 2015. She started at SCC as a part-time English instructor in 1984 and joined the full-time faculty the next year. She later served as director of admissions for seven years then spent five years as the chair of general education. She spent her last three years as a full-time English instructor before retiring in 1999. She was appointed by the Jackson County Board of Commissioners, and her current term runs through June 30, 2023.