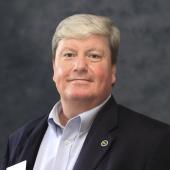 A longtime general and morning manager at High Hampton, Mr. Jones' ties to SCC run long and deep. His mother, Ann Hervey Jones, worked at Southwestern in the early 1970s. As a teenager, Mark Jones got his first tax-paying job at SCC - where he used a sling blade to maintain the grounds during the daytime. He mopped floors at the college in the afternoon.

He later taught classes in the hospitality and tourism program for SCC and Jackson County Public Schools in the late 1990s, and he served on the culinary arts advisory board for several years.